Seve missed the cut, rounds of 75 and 78 giving Foster an unwanted free weekend in his first week on the job.

“The only other time I’ve ever felt that apprehension working for somebody was when I did the week with Tiger Woods at the Presidents Cup in 2005,” he says. “Steve Williams’ wife was having a baby, so he called on me to work with him that week.

"I said to Tiger afterwards that the only other time I’d experienced that kind of aura from a professional golfer was with Seve. Their talent made you almost fearful of them. You can compare it to Mike Tyson. When he was at his best, his opponents were beaten before they even got near the ring. It was the same with Seve. When his name appeared on a leaderboard, people folded. I saw it with my own two eyes. He’d go on a charge and you could see the other players in your group wilting right in front of you. He was the ultimate warrior on a golf course. He was a wonderful, generous man off the golf course but on it, he was hard as nails. He was there to win.

“He always used to say to me, ‘Billy, we are here to win. Second is no good, okay?’ He was the most fierce competitor. He loved to put pressure on his opponents. He’d deliberately stand in their line of sight or hover or breathe heavily close to them. He was the master of gamesmanship. He was a born winner. For me, Seve was Tiger before Tiger was Tiger. I mean, you think about when Seve’s career started to really slide, around the mid-1990s, who was showing up? Tiger. It’s almost like Seve handed him the baton.”

Over the next four-and-a-half years, Ballesteros and Foster teamed-up to great effect, forging a tight relationship off the course as much as on it.

However, by early in 1995, the cracks were beginning to show. Seve was in his late thirties, the wins were drying up and, having spent 61 weeks as world No.1, he was on a slow slide down the rankings.

By the time he and Foster arrived at Augusta for their fifth Masters together – Seve’s 19th – the writing was on the wall. It ultimately proved to be their final week together.

“That week started shit and just got steadily worse,” says Foster. “It all began with this carbon-shafted crook-necked putter he was using. We were on the first tee in a practice round playing with [Miguel Angel] Jimenez and [Jose Maria] Olazabal and he said to me, ‘Billy, pass me the towel’. So, I give him the towel and he starts rubbing this carbon shaft to make it warm so he could bend it as he felt it was a bit flat. As he’s rubbing it, the shaft snaps in half and he face-plants into the turf right there on the first tee. Well, that was it, wasn't it? Olazabal and me fell about laughing. We were in hysterics and, at first, Seve was laughing as well. But suddenly, the laugh turned into a scowl and then into the most evil face you'll ever see. He shot me a look that said, ‘Oh, so you think this is funny, ey?’

"Luckily, he had a spare, so he sent Mac O’Grady, his coach, to go and collect it. Before he sent him on his way, he told Mac the grip wasn’t on the right way. He was under orders to make sure it was fitted properly and to bring it to Seve on the second green. Sure enough, off goes Mac. He gets the putter, sticks it in a vice and tries to twist the grip to the way Seve wants it. Except he only goes and snaps that shaft as well, doesn’t he?

“I can still see him picture him coming down the hill towards us. He’s 200 yards away, the shaft in one hand and the head in the other. I just remember thinking, ‘Oh God, here we go.’ That set the tone.

“After that, Seve just picked on me the whole week. He’d give it me in the neck over the most stupid stuff. He’d say ‘I need more tees’ so I’d go into his bag and get some for him and he’d be annoyed that I didn’t have any in my pocket. Trivial things. ‘Pass me a banana. No, no, no! Why is it yellow? Why is it not black?’ It was torture.”

The simmering tension between the pair reached boiling point on the 17th hole in the final round.

“We’re standing over the second shot,” recalls Foster. “He thinks it’s a 7-iron. I think it’s a 6. The pin is back left. I manage to talk him into going with a 6. It ends up going just a yard off the back of the green, just five or six paces from the hole. He’s got a chip straight back up the hill, which he hits five or six feet past. I was almost down on my hands and knees praying to God that he’d hole the putt because I knew what was coming if he missed. Sure enough, he missed.

"Well, the grief I got for that. Three times on that green, ‘Why I listen to you? You are the worst caddie I ever have, you son of my bitch!’ On the way to the 18th, he stops and bollocks me for a fourth time. By this point, there’s a volcano starting to bubble inside me and I remember thinking, ‘If he keeps this up, I’m going to lose it.’ We get onto the 18th tee and he has yet another go at me. Bollocking number five. That was it. Mount Vesuvius erupted.

“I turned to him and, at the top of my lungs, I screamed, ‘I FUCKING HEARD YOU, ALRIGHT?’

“We were playing with Ray Floyd. He had Steve Williams on the bag and the jaws on the pair of them just about hit the floor. I’d be amazed if they didn’t hear it up at the clubhouse. But Seve didn’t even look at me. He just played his shot and stormed off.”

After the round, Seve sent one of his brothers to fetch Foster and have him meet him on the range.

“Apparently, he wanted to see how far his wedges were going,” recalls Foster. “So, he sends me down the range, 140 yards away. I’m standing up there shaking, pretty much having a nervous breakdown. He hit his first shot. It took one bounce right in front of me and, instinctively, I headed it away. I did that with every shot he hits. One bounce, head. One bounce, head. I could hear the crowd laughing. He waved me in. We go to the side of the clubhouse and he says to me, ‘Billy, what is your problem?’

"Over the next five minutes, I just unleashed this tirade at him. All of this pent up aggression, emotion and poison just came pouring out of me. I called him every name under the sun. He just stood there, his hands covering his heart as though I’d stabbed him. ‘Billy, I love you like a brother’ and all that.

“I got back home to the UK the following Tuesday. As I walked into my house, the phone was ringing. It was his manager saying that my services were no longer required. That was that.”

A few months later, at The Open in St Andrews, Ballesteros asked Foster to come back but the Englishman refused.

“I was with Darren Clarke by that point and he was on the way up. Seve, by comparison, was on the wane, so I had to do what was right by me. It was just time to move on. It was tough, though. Any time I’ve finished with a player, I’ve taken it hard, be it Seve, or Darren, or Lee [Westwood]. It hurts. It’s almost going through a divorce. You spend eight hours a day for something like 30 weeks of the year with this person and then, suddenly, it’s all over and you go your separate ways.”

Nonetheless, the pair remained close and, to this day, Foster talks about his former boss with real, genuine affection.

“He was an absolute gentleman,” he says. “So incredibly humble. It didn’t matter who you were, he would give you the time of day. He went out of his way to help people, whether it was charities who needed his support or young professionals who needed a gentle steer in the right direction. I can’t tell you the number of times I saw him go over to give some advice to a young player on the range. He was always willing to help. I don’t think he ever lost that ‘peasant Spanish fisherman’ mentality. Despite everything he achieved in the game, I truly believe he never stopped being that kid who grew up playing with one golf club on the beach.”

As injury and illness dogged the final few years of Seve’s life, all Foster could do was watch on from afar with an gnawing feeling of sadness and helplessness.

“You could see how much it hurt him to lose his game. I was on the golf course with him many times where he was really struggling. It was almost as though he was sinking into a depression right in front of you. Golf and being a great champion meant the world to him and, when he suddenly couldn’t do it any more, you could see the frustration and sadness written all over him. It hurt him terribly.

“Yet he fought his illness like only Seve could. If it had been me, I’d have been rolling over within weeks – but not Seve. He fought it with all of his trademark tenacity and ferocity. I remember how desperate he had been to come to St Andrews in 2010 to play in the past champions’ event on the Wednesday of The Open but, by that point, he was too unwell.

“Honestly, if I could have gone to Spain and given him a piggy-back all the way from Santander to St Andrews, I would have done. That’s how much I felt he deserved to have the send-off that every great champion deserves. Arnold Palmer, Jack Nicklaus, Tom Watson – they’ve all stood on the Swilcan Bridge and waved farewell. Seve deserved that, too, but unfortunately he never got it.

“Still, in a way, it’s quite nice that the lasting image people have of Seve at St Andrews is of him punching the air on the 18th green in 1984. That’s the way he should be remembered. 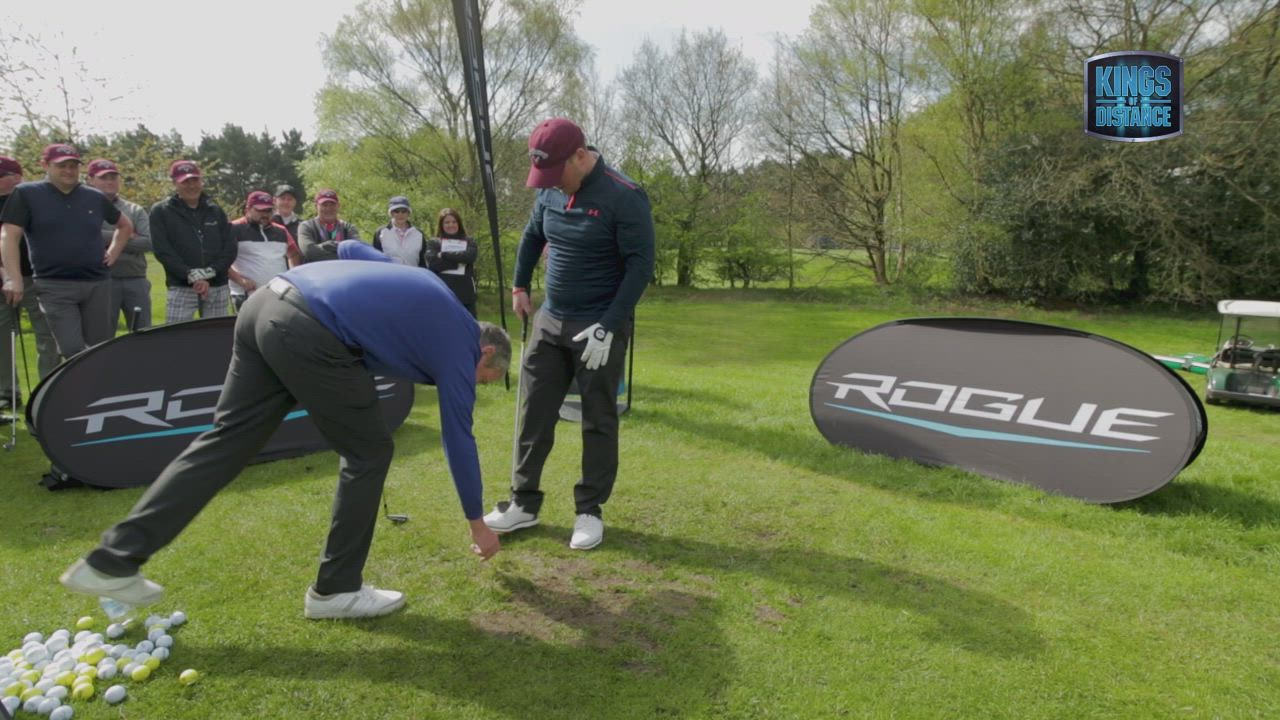 A simple tip to help you stop topping the golf ball