Shiels: ‘I will remember this experience forever’ THE WORLD’S most watched golf YouTuber, Rick Shiels, has completed an epic golfing pilgrimage across Scotland ahead of the historic 150th Open Championship, raising an incredible £115,000 for Prostate Cancer UK.

On Sunday evening, Shiels, whose channel boasts over two million followers, crossed the line of a mammoth 150-mile trek from Prestwick Golf Club – the location of the first Open in 1860 – to the Old Course in St Andrews, all while carrying his trusty golf clubs on his back and surviving a stress fracture to the foot.

The six-day march, dubbed ‘#Walk150’, began on Tuesday, June 14, and Shiels walked throughout Men’s Health Week to highlight the one in eight men affected by prostate cancer in the UK, aptly finishing on Father’s Day.

Shiels was greeted by hundreds of fans while walking from the west to the east coast of Scotland, making stops at Cawder Golf Club and the Gleneagles resort before arriving at the iconic Swilcan Bridge on the Old Course.

From the ever-changing weather, rubbing golf bag and a fractured left foot, Rick described the walk as “the hardest challenge” of his professional life.

“This was the hardest challenge of my professional life,” said Shiels. “I’m truly humbled by the fans and people I don’t even know who came to see me and who sent me a supportive message.

“It was a real honour marching through this great country, visiting some fantastic golf courses, enjoying spectacular scenery, but to also learn more about prostate cancer and meet some of the people this terrible disease affects.

“I’ve watched The Open since I was a boy, so to walk from the birthplace of the tournament to where it’ll be hosted this year was quite an emotional experience.

“There were massive highs and lows on each day of the walk, but the fantastic support I received – from Sky Blue Adventures, who looked after me, people waving as they drove past, everyone who donated and everyone who came to meet me at St Andrews, including my family – helped to get me over the finish line.”

Shiels’ efforts raised funds for Prostate Cancer UK, a cause he supported first in May 2019 when he staged the world’s first YouTube Golf Day, which raised more than £10,000 for the leading men’s health charity.

He initially aimed to raise £26,200, to reflect the marathon distance he walked each day, but smashed that target within 24 hours after announcing his challenge on his YouTube channel only hours before.

“I’m so proud to have raised £114,000,” he said. “I’ll remember this experience forever. To be able to do this challenge for Prostate Cancer UK and to have done my bit in the fight against the most common cancer in men is a great feeling. It’s so important for men to know of their risk of prostate cancer and I hope that this walk has helped shine a light on the disease and the work of Prostate Cancer UK.”

Nicola Tallett, Director of Fundraising & Supporter Engagement at Prostate Cancer UK said: “We’re hugely grateful that Rick supported Prostate Cancer UK on his #Walk150 Challenge, and we’re delighted at the impact it has had – not just in Scotland, but across the UK – in delivering life-saving information about prostate cancer to Rick’s fans.

“Rick’s epic efforts, and the fantastic fundraising which followed, will go towards life-saving research and supporting men affected by prostate cancer and their families.

“I’d like to say a big thank you to Rick on behalf of everyone at Prostate Cancer UK, not to mention the 400,000 men living with a prostate cancer diagnosis and their loved ones. We all hope he can now put his feet up and enjoy The Open next month.” 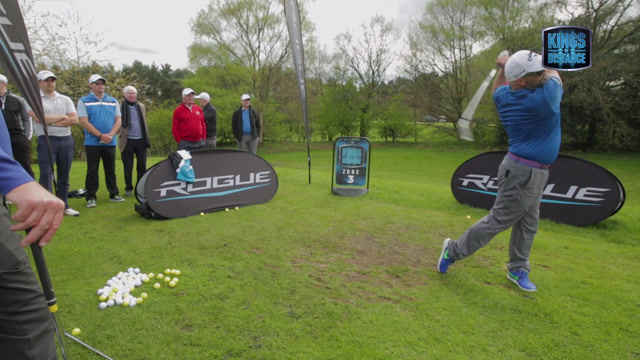 How to improve your balance during the golf swing